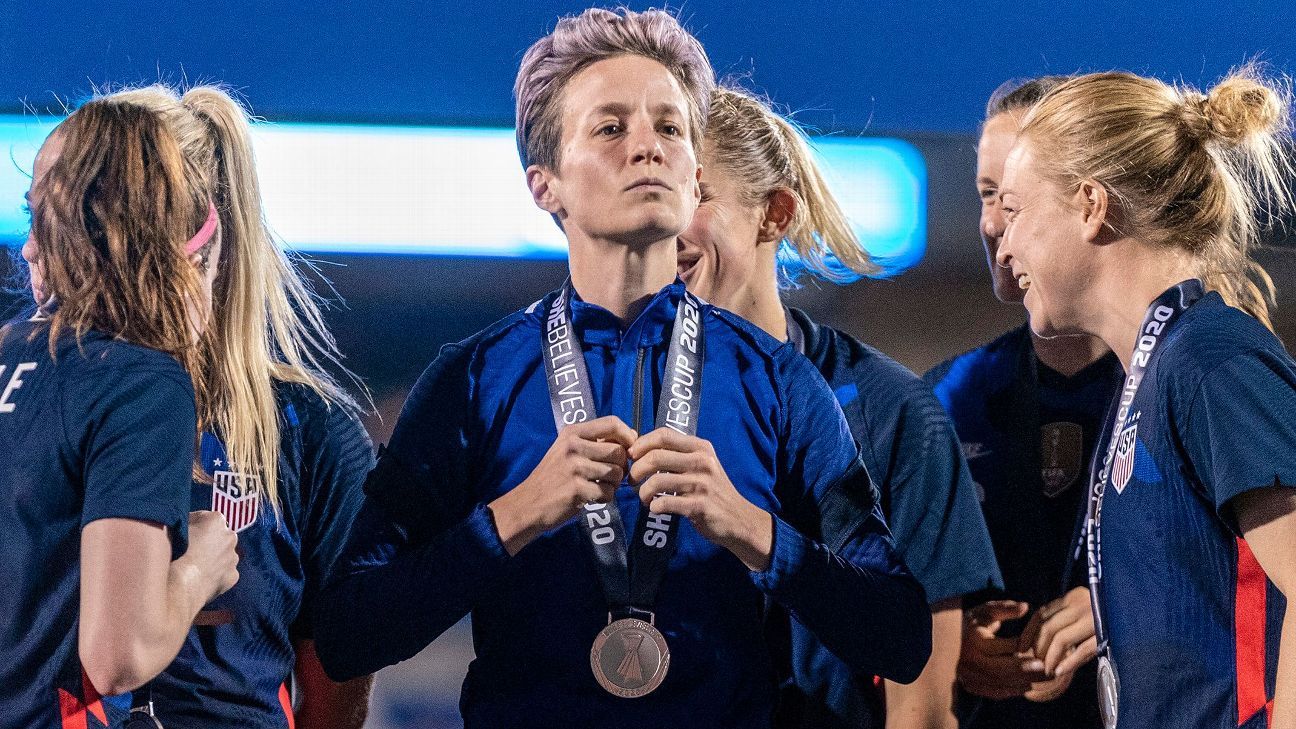 Rapinoe on Tuesday spoke to reporters for the first time since a mob supporting president Donald J. Trump stormed and occupied the U.S. Capitol. The violent riot resulted in the deaths of five people, including a Capitol police officer.

“I think the courage of the lawmakers to get back in there and continue their work, and the utter bottomless-ness of some of these lawmakers to continue to incite violence and still call for overturning the election when the mandate’s been given by the United States and by the people of United States, is just absolutely insane,” Rapinoe, who joined the USWNT at its January camp after nearly a yearlong absence from the team, said.

“They should be held accountable.”

Throughout her career, Rapinoe has been a vocal advocate for equal pay and other social justice issues, including LGBTQ rights. She sparred with Trump via Twitter during the World Cup and last year was involved in get-out-the-vote initiatives in support of President-elect Joe Biden.

She got emotional when she was asked about how she felt watching fellow NWSL players kneel and speak out against systemic racism during the Challenge Cup. In 2016, Rapinoe knelt in solidarity with San Francisco 49ers quarterback Colin Kaepernick. U.S. Soccer reacted by prohibiting players from kneeling during the anthem, a rule that was rescinded last June.

“I have just a huge amount of pride and respect for so many people going through the journey and learning and growing, and feeling more comfortable speaking out about things,” she said. “What we saw through the summer and just through the pandemic, with the protests, hopefully a lot of people’s eyes are opened up, particularly my fellow white teammates.”

Ada Hegerberg explains her admiration for the USWNT following their legal battles with US Soccer.

She praised U.S. Soccer for apologizing over the ban.

Rapinoe, 35, last played for the national team on March 11, when she scored in a 3-1 SheBelieves Cup victory over Japan. She told reporters she was happy to be back playing soccer.

“I actually feel really good physically and just refreshed in a lot of ways, mentally and emotionally. I’ve spent obviously a lot of time quarantining at home with Sue [Bird] and just being able to relax,” Rapinoe said. “But I’m obviously so excited to start playing again. It was really difficult to not be out on the field with my teammates and to not have a consistent training environment. Anyone who really knows me knows I hate to work out on my own as it is.”

When the coronavirus began to take hold in the United States last March and the National Women’s Soccer League called off its season, Rapinoe — who plays for OL Reign — hunkered down at home.

She said part of her reasoning for the break was fear of COVID-19, but she was also exhausted from the whirlwind that came after the U.S. victory in the World Cup in France. Rapinoe earned FIFA Best Player and Ballon d’Or honors following her play in soccer’s premier tournament.

For her career, Rapinoe has scored 52 goals with 68 assists in 168 appearances with the national team since her first call-up in 2006. She scored on a penalty kick in the United States’ victory over the Netherlands in the 2019 World Cup final.

During her break this summer, she hosted the HBO special “Seeing America,” which included U.S. Rep. Alexandria Ocasio-Cortez, and she released a memoir, “One Life.” In October, she and WNBA veteran Sue Bird announced their engagement.

Coach Vlatko Andonovski said Rapinoe has not disregarded her fitness during the layoff. He expects Rapinoe and Carli Lloyd, who hasn’t played since last spring because of injury, to get minutes in a pair of exhibition games against Colombia later this month in Orlando, Florida.

“Megan and Carli have been doing a tremendous, tremendous job. Our high-performance department, high-performance coach, has been monitoring everything that they’re doing,” Andonovski said. “We have a pretty good idea of where they stand. In fact, both of them are a little bit ahead of what we expected them to be in January camp from the physical standpoint.”

Information from The Associated Press was used in this report.